Are you planning to own a dog but you do not know which one to choose? Well, one of the most trending dog breeds is the Boston Terriers. They are small dogs but with a real demeanor. Looking at them will make you adore their cute physique. But there are things to know about Boston Terriers that will make you fall in love with.

To help you finalize your pet-owning decision and to end up your procrastination, here are the important details that should know about this small, lovable pooch.

Although small, the Boston Terriers are terribly fun and smart dogs. They are, no doubt, the best example of great things that come in small packages. Being around people and other family members is one of the things that they are really fond of doing. Here are more things to know about Boston Terriers.

From 1865 to 1870, they crossed an English bulldog and an English White Terrier. The offspring were then mated with dog breeds that are smaller. The process of small dog mating continued until they came up with the size and looks of the now well-known breed Boston Terriers.

In 1891, they formed the Boston Terrier Club of America in conjunction with the alteration of the breed’s name. The name actually changed because of the addition of the name of the city where the dog breed originally came from. After two years, about 1893, the American Kennel Club (AKC) already approved the registration of the breed.

Another important things that you should know about Boston Terriers are the way they look. Basically, they are small dogs with a muscular body built and short, squared physiques. With a square and flathead, the Boston Terriers have erect ears and big, round eyes. In terms of their tail, it is actually low which is straight or curled.

Boston Terriers also have short coats that are seal, brindle, or black in colors having some white markings. Do not underestimate the size of this dog breed because they are extremely intelligent and their personality is really superb. Moreover, the Boston Terriers is also known as Bostons.

Since the Bostons are also highly intelligent dogs, they are also an easily trainable breed. However, house training them tends to be difficult. So, make sure that you are training them regularly and consistently. That way, it becomes a big help for the Bostons to prevent the development of dominance and fighting behaviors with other dogs.

During training, it is really important to remember to train them without any harshness as this dog breed can be very sensitive to the tone of voice of humans. The Boston Terriers can get along well with other animals. Moreover, the Bostons are mostly regarded as therapy dogs.

Aside from having a good relationship with other dogs, the Bostons are also good with strangers. They are also great to mingle with kids and the elderly, and they really enjoy being with their family. Being an affectionate dog breed, Boston Terriers love playing and staying active.

Another inclusion to the brachycephalic dog breed, the Bostons may generally experience breathing difficulties. The good thing to know about the Bostons is that they are one of the dog breeds that are not restricted to travel on certain airlines.

Well, looking at this dog breed can make  you fall in love with them. Yet, before getting into their magic, there are more things to know about Boston Terriers. Having an idea of those will help you determine if the Bostons are the right one for you.

The Bostons have obviously smaller body structures yet they highly need walking and free playing every day. Being indoors does not make them that active enough like the other dog breeds. But, even a small yard may be sufficient for them to perform outdoor activities. This means that their exercise requirements are just on an average level.

So, for those living in apartments, the Bostons may be an ideal one for you. Just ensure to give them the daily exercise that they need. Also, keep in mind that this dog breed is highly sensitive to extreme weather. That’s why it is really crucial to take note of it before going outside with the Bostons.

Same as the exercise requirements of the Boston Terriers, their grooming needs are also on an average or medium level. They are average shedders and having short and smooth coats make them easy to groom. Just don’t forget to bathe the Bostons as needed and brush them on a weekly basis.

Moreover, always do a daily check-up on the dog’s face, eyes, and ears. In case needed, clean those body areas of the dog. Don’t forget to regularly trim their nails and brush their teeth.

In terms of the health of the Boston Terriers, this is one of the aspects of their lives that is really important to learn. If there are things to know about Boston Terriers, keep in mind that their health conditions are critically high. This means that they are prone to a number of health problems.

Although the following conditions may not all be seen with the Bostons, it is still good to have an idea of which conditions they will possibly encounter.

As a summary of the character traits of the Bostons, here is a simple statistic of their behavior:

In case you want to have a Bostons and you will get it from a breeder, just make sure that it is a reputable one. Make a thorough check that the breeder is not operating a puppy mill.

Another way of acquiring them is to process for its adoption. Adopting Boston Terriers can be done by pet searching online. You can also consider asking the local shelters and rescues for Bostons available for adoption.

However, there are numbers of things that you should have to consider when you opt in adopting one.

Adoption of the Boston Terriers: Things to Know Before Adopting

Check on the following thing and try to determine if the Boston Terriers would be the ideal pooch for you:

Although already smart, the Bostons may demand your time to train them, especially at an early age. Keep in mind that intelligent dog breeds without proper training may probably develop unwanted dog habits. In training your dog, decide whether you will be using a dog treat, some clicker, or employ obedience training same with the Golden Retriever.

Invest enough time with the Bostons

Actually, you do not need to always have a walk together at the park. Outdoor activities don’t really matter with this dog breed. What’s important for the Boston Terriers is that you have enough time to mingle with them. Leaving the Bostons for a long time period is not actually a good idea.

Actually, the Bostons may always get thirsty for your attention. Although small, they always want to be your apple of the eye. In fact, they will try to do things that might be ridiculous to focus your eyes on him. They will always like to be on your behind as you roam around. In case you do not like that kind of setup, then the Bostons might not be the one for you.

Since the Bostons are prone to have different health issues, this could generally call for expensive veterinary bills. Knowing this, it is better to consider getting pet insurance especially if you are not sure that you are able to afford an emergency.

Arouse your interest in canine’s sports

The Boston Terriers are really happy even if they are not engaged in any type of canine sports. However, it would be very nice to know that the Bostons are great competitors. In case you want a trophy dog, then this dog breed can be your perfect fur buddy.

Generally, even the Bostons have a small body build, there is a lot more than they can offer. They can basically play well with kids and, at the same time, be comfortable lying in your lap. So, that could deliver more of what you expect for it.

Aside from being one of the most good-looking dog breeds, there are also some intriguing things about the Bostons. Check here what makes them the talk of the town.

Favored as the American Gentleman

The Boston Terriers are commonly called on their nickname the American Gentleman. This is primarily because of their refined etiquette. Since they are really subtle four-legged creatures, this dog breed is also an amazing house pet.

Valued as an American Dog

Aside from being hailed as the American Gentleman, the Bostons is also the very first dog breed brought up within the US nation. Browsing on the history, records of the origin of this dog breed is well documented and basically updated.

Delighted being the University Mascot

Who did not know the famous mascot of Boston University? Well, it is actually one of the interesting things to know about the Boston Terriers. This dog breed tends to be the school mascot of the above educational institution. Boston’s mascot actually has a name which is “Rhett“.

Acclaimed as the Official State Dog

Initially, the list of states in the US that has an official state dog is not that much. One probable reason for this is that there is not enough dog breed that originates from the US. Interestingly, Massachusetts claims to be the first American state that happens to be the birthplace of the original Boston Terriers.

After a century, Massachusetts’ official recognition for Boston Terriers as its official state dog happened in 1979. Since then, everyone within the states fell in love undoubtedly with the Bostons.

If there is one dog breed that is highly suited for the royals and the authorities, the Bostons are the first honorable mentions. Based on history, there were two American Presidents who once owned the Boston Terriers. These were former presidents Gerard Ford and Warren Harding.

Gerard Ford had two Bostons during his childhood stage which he named Fleck and Spot. Meanwhile, Warren Harding’s pet had the name of Hub.

The Experts of Agility

Boston Terriers are champions of agility and they really excel in this category. Add up their intelligence, the Bostons may also learn obedience training easily. Aside from that, they can even master any obstacle courses at a fast rate. The thing is, the Bostons love agility courses because of their love for running and playing.

Let me give you some trivia here. All short-faced dogs may always end up producing flatulence. This usually happens once the Boston Terriers take up some air as they eat. The ingested air may go directly to the dog’s digestive system and would try to go out through the other end of the digestive tract.

The outcome is incredible flatulence with both sounds and smell. Generally, the food consumed by the dog is the main responsible for this gassiness. Moreover, in case they tend to eat up food with ingredients that are indigestible, flatulence may get worse.

There are such great things to know about Boston Terriers. From their subtle demeanor to interesting facts about this small but terrible dog breed, knowing about them makes one eager to have them. But, among other information about this dog, you must have to check on their health. That way, you will have a great quality time with this cute and adorable doggo. 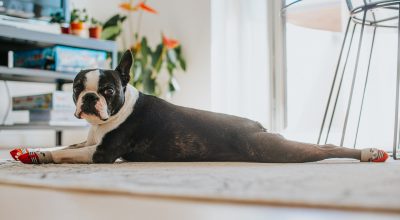